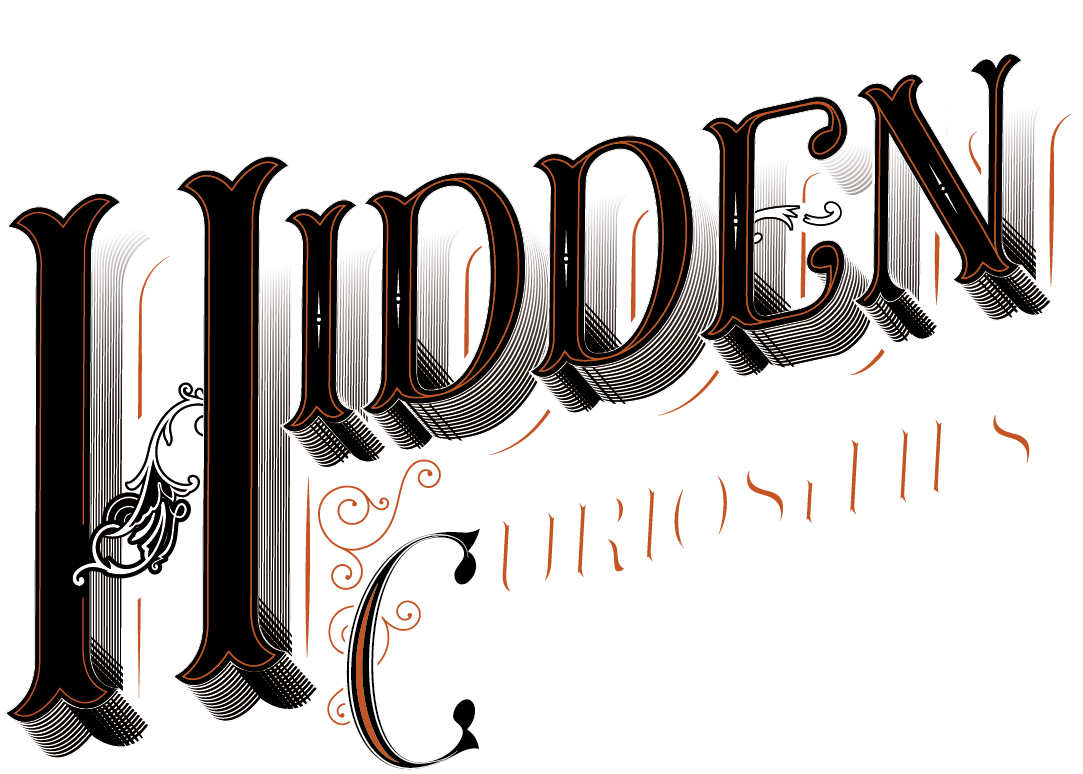 Learn how to bake Yuzu & Sansho Pepper Macarons - the perfect accompaniment to an Aranami Dry Martini. 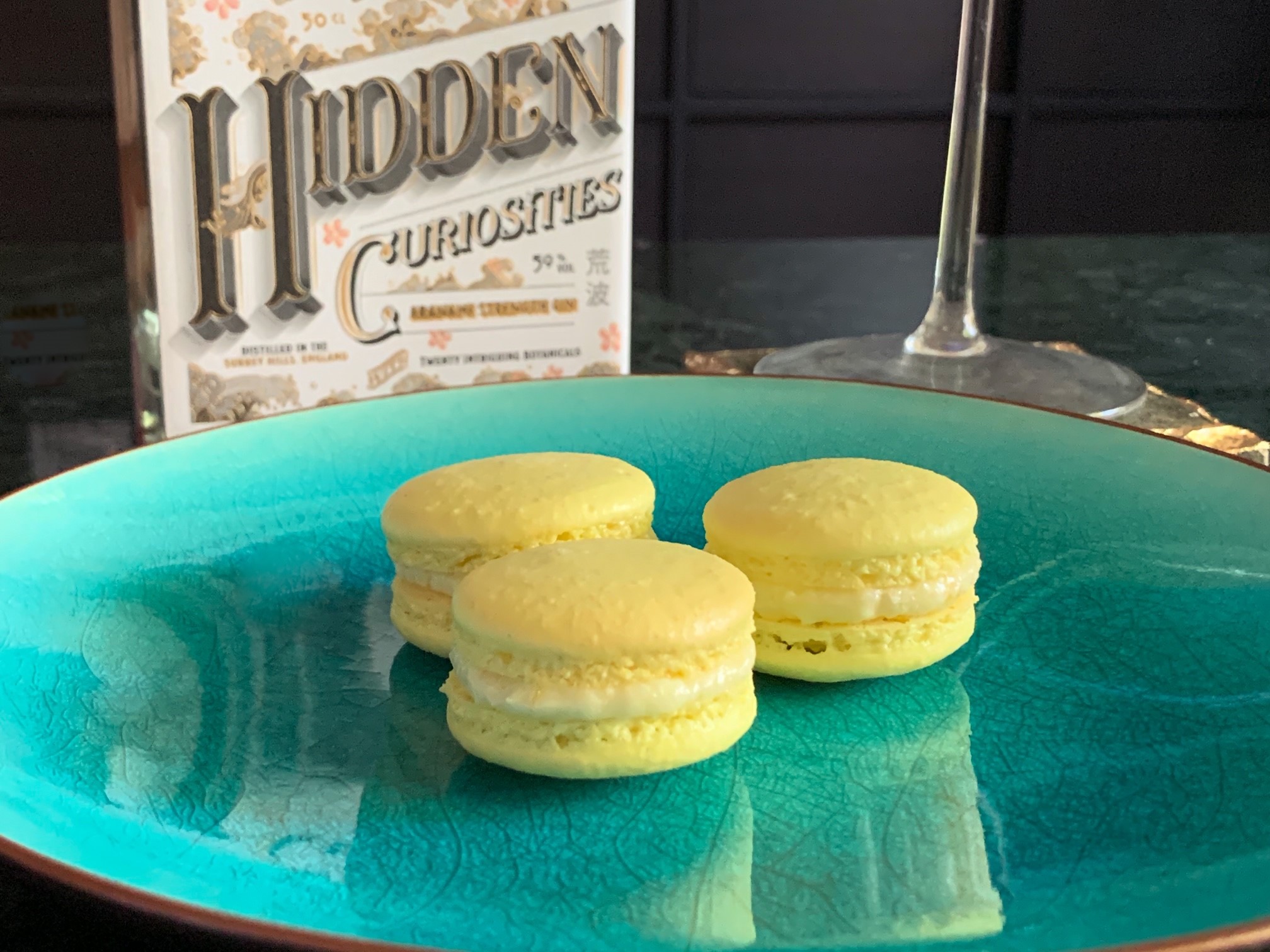 This combination will blow your mind.

I've been trying to master macarons the past couple of weeks during lockdown, and decided to attempt Yuzu Macarons with a lemon zest, yuzu juice and sansho pepper buttercream, and they're possibly the best I've made so far.

They're crispy on the outside, chewy in the middle, with a deliciously tangy and creamy buttercream with the lemony sansho pepper playing havoc with your tastebuds.

These macarons pair incredibly well with an Aranami Strength Dry Martini with just a rinse of Mancino Sakura Vermouth, and what a cracking combination, if I do say so myself.

Bring elegance and sophistication into your home... 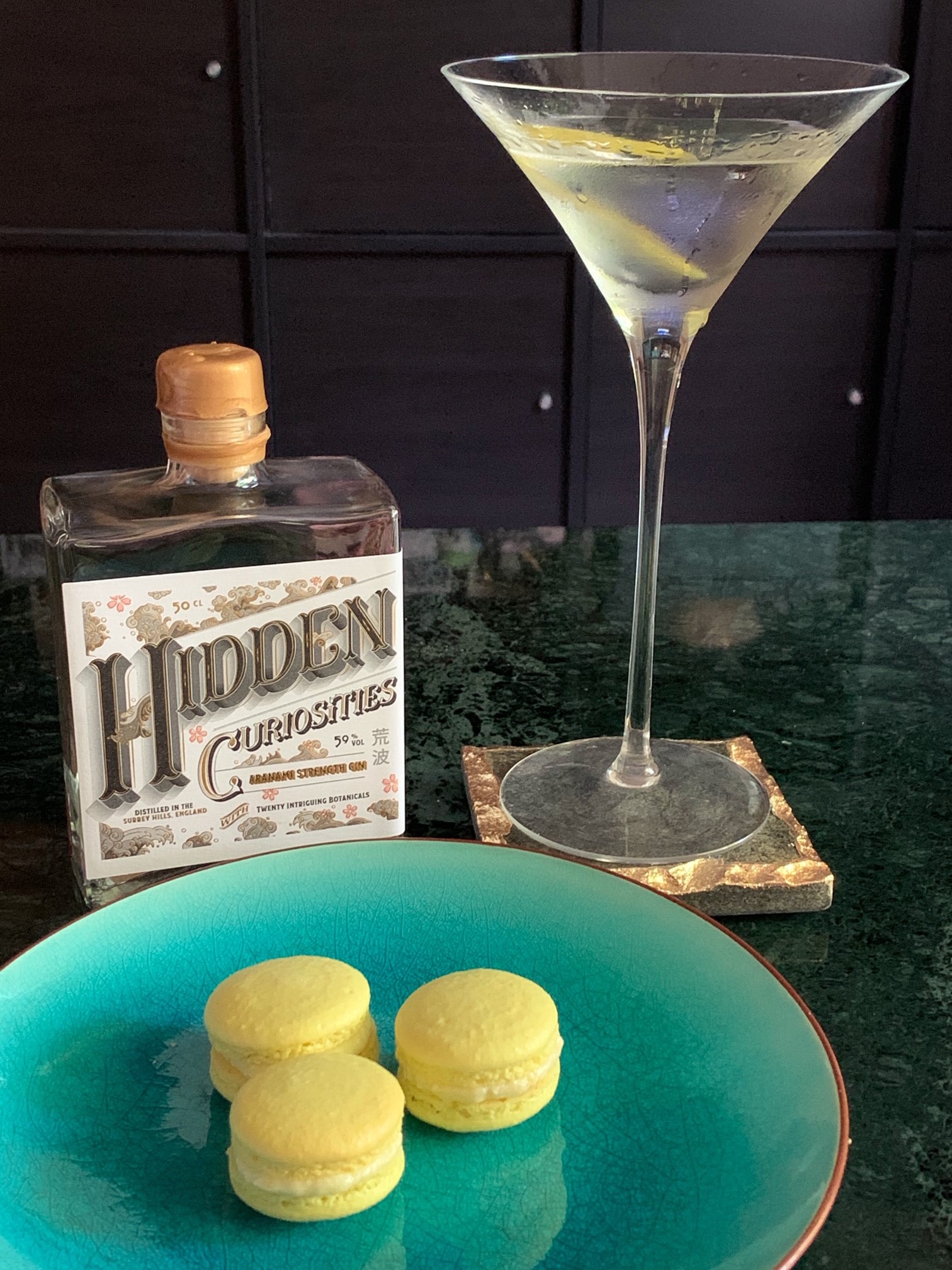 Making macarons isn't easy, it requires focus and attention, and most of all, patience! But seeing as we have time during this lockdown, perhaps you'd be up for a challenge and like to try your hand at these? I can't guarantee they will come out perfectly the first time, but part of the process is failing so you can learn from it and understand what went wrong, in order to improve, so long as you follow the steps and don't go off-piste (which is what I like to do).

See recipe and tips below. 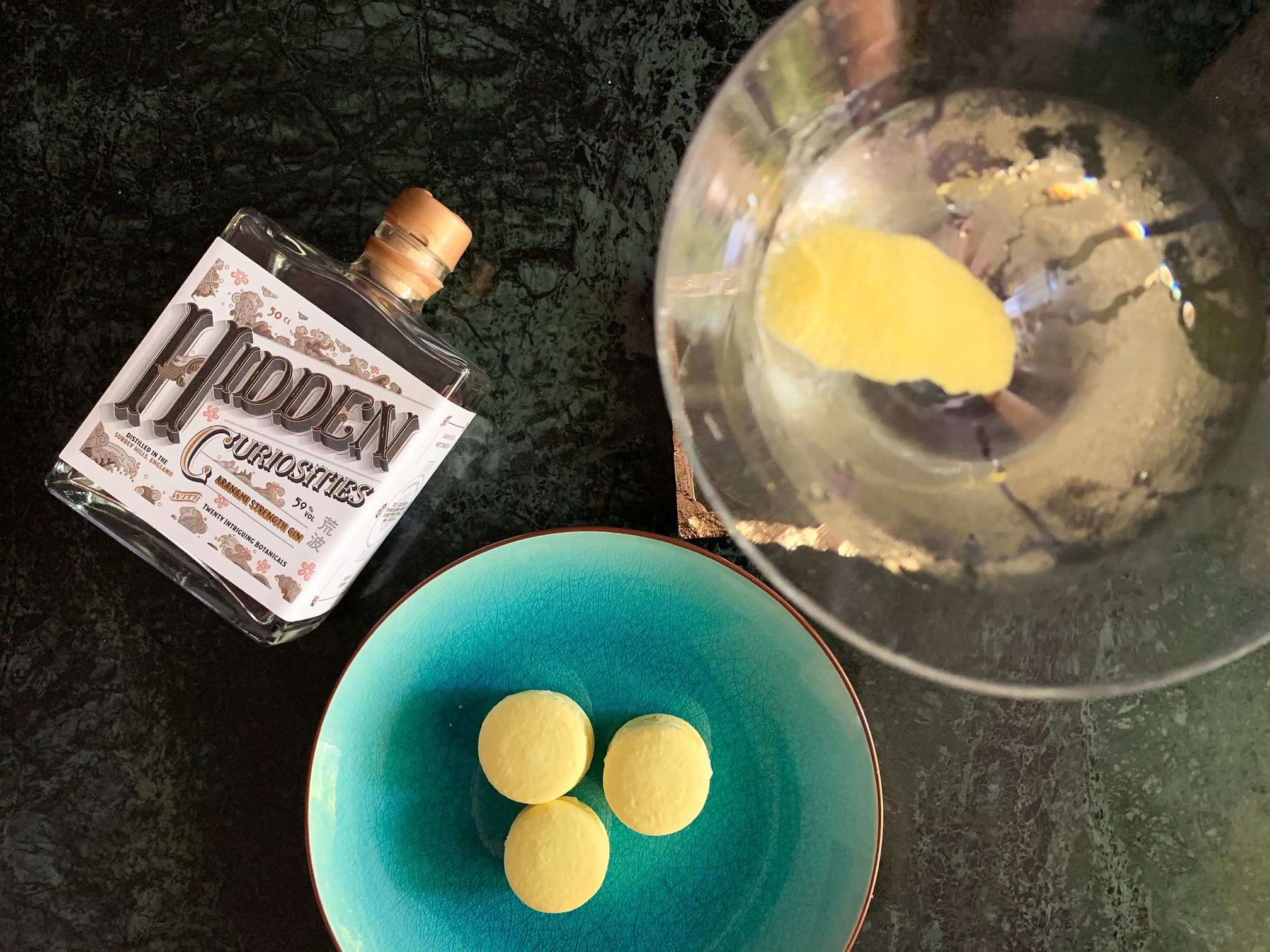 Ingredients for the Macaron Shells

• Tiny pinch of Cream of Tartar

Ingredients for the Buttercream

• Zest of Half a Lemon 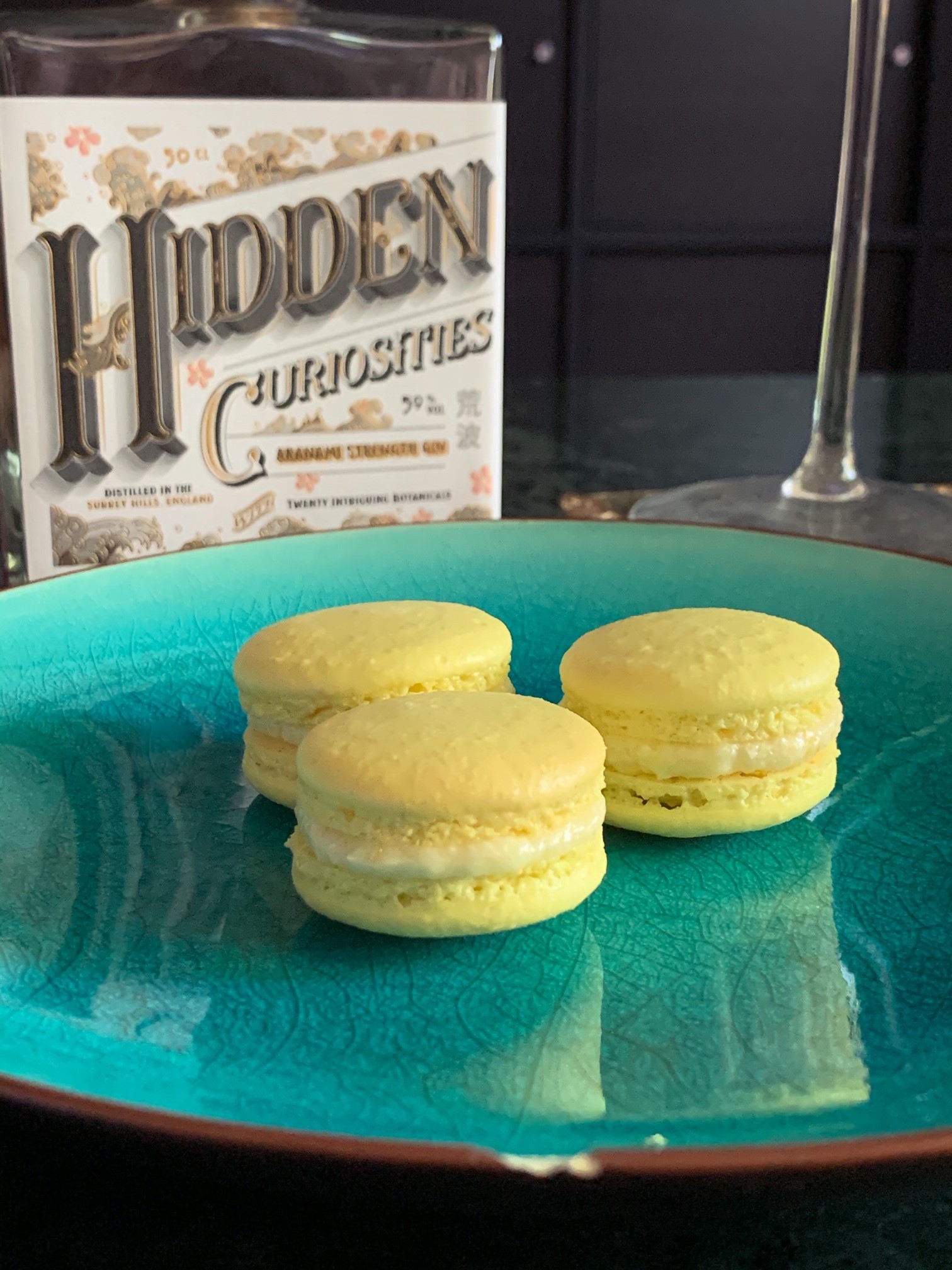 2 - Sieve your ground almonds and icing sugar into a bowl, add the yuzu powder if you have it.

3 - In a separate bowl, whisk the egg white until it gets foamy, then add some of the sugar, and cream of tartar, and salt and carry on whisking, adding the rest of the sugar as you go along. Then add the gel food colouring - be careful not to add too much or this can spoil the macarons.

4 - Once your meringue has stiff peaks, add in the dry mix to the bowl, and fold the two together with the silicone spatula - this is known as the macronage stage. I would highly recommend watching a video on how to do this, as this stage is pretty critical. You want to beat out a lot of the air but not all of it, keep folding and turning the bowl until the mixture is homogeneous and looks like lava. To test this, you should be able to make a figure of 8 in the mix with the spatula without the mix breaking, and it should fall and slowly sink back in. This is probably the trickiest part and you don't want to under or overdo it either.

5 - Once your mixture has been macronaged, fill a piping bag and on baking parchment on a baking tray, while keeping the piping bag perpendicular, pipe small 1.5 inch in diametre circles, ensuring you leave 1.5-2 inches of space between each one. Tip: To stop the baking parchment from moving, dab a bit of the mixture in all four corners of the metal baking tray and the parchment should stick to it.

6 - You now need to get rid of the excess air from the macarons, so this is where you bang the tray on the tabletop a few times to release any bubbles (and to reduce the appearance of "nipples"). Then leave to rest for 30mins to an hour until they've formed a skin (dry to the touch and have lost their stickiness). 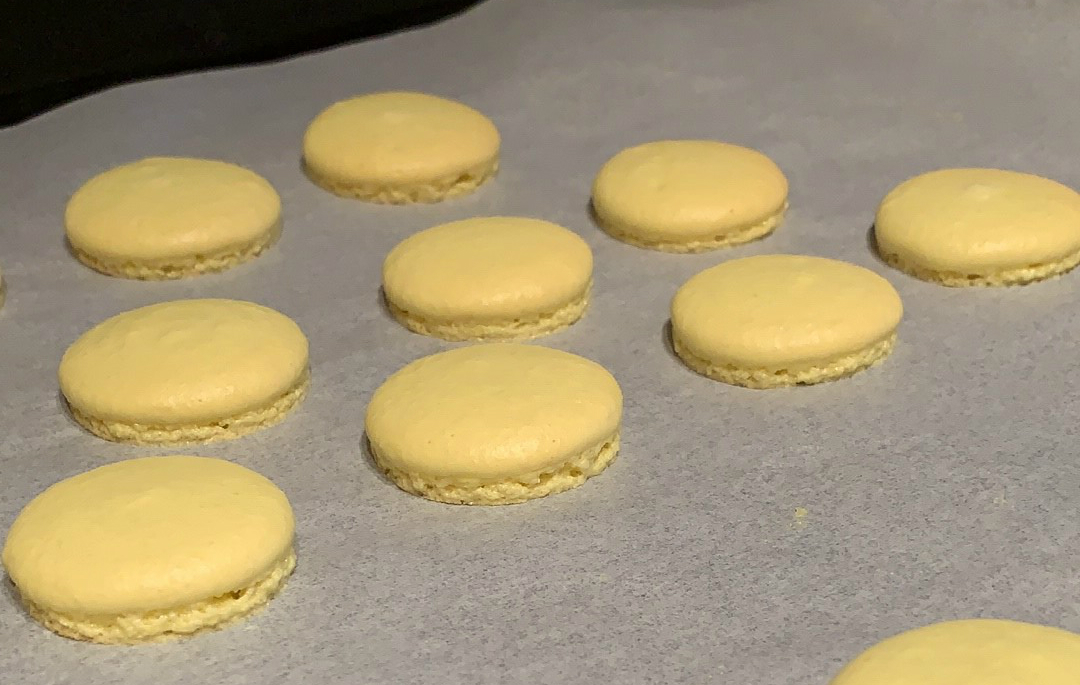 7 - Bake them in the oven in the middle shelf for 15 minutes, turning the baking tray around halfway to ensure even baking. Tip: Essentially you want to dry these macarons out as much as possible as opposed to baking them at a high temperature and browning them, so you want to get rid of excess moisture, so put a wooden spoon in the oven door so it's left ajar in order to let any steam out.

8 - While these are baking, it's time to make the buttercream. Cream the butter with an electric whisk, add the icing sugar, yuzu juice, lemon zest and sansho pepper, and carry on whisking until you get a delicious buttercream texture.

9 - Take the macarons out from the oven and wait for them to cool completely. Don't be tempted to pull any off the baking parchment or the bottoms will break.

10 - With any luck, the macarons will have formed "feet" (also known as pied) - these are the ruffles you see at the base of the shell which is a classic feature of a macaron. Hopefully, you will have achieved smooth tops and bottoms too. If not, don't be disheartened as this isn't easy to get right the first time, keep trying as it's incredibly satisfying when you finally get it right!

11 - Finally, match up the marcon shell sizes in pairs, fill them with buttercream and put them in the fridge. They say macarons taste best after being in the fridge for 24 hours to allow the flavours to mingle, but I think they also taste fantastic freshly made, and these ones especially, with an Aranami Strength Gin Dry Martini.